Winter guard is an indoor color guard sport derived from military ceremonies or veterans organizations ceremonies. Unlike traditional color guard, winter guard is performed indoors, usually in a gymnasium or an indoor arena. Performances make use of recorded music rather than a live band or orchestra. Winter guard was invented in the United States, where to date is still by far the most predominant scene for the sport. Winter guard ensembles commonly perform at judged competitions officiated by local and regional associations using criteria developed by Winter Guard International.

A winter guard generally consists of performing members under the direction of an instructional staff. The staff of a winter guard team ("the guard") are drawn from many different specialties, which sometimes overlap: there are equipment instructors (sometimes one for the unit, sometimes broken out into the individual sections), dance instructors, and drill instructors. The equipment instructors create the choreography performed with equipment and teach it to the guard. The dance instructors create and teach the movement choreography in the show. The drill instructors focus on the position of the guard members relative to one another and to the boundaries of the performance area, in addition to where each member goes at which specific time during the performance. In some cases, all of these roles are fulfilled by one sole director.

A winter guard team usually has a captain, who is one of the performing members who leads and represents the guard. The captain may assume minor administrative duties and lead the team when instructors are not available. The captain is also the representative of the guard during awards ceremonies or retreat.

Three primary types of equipment are used in winter guard: flags, rifles, and sabres (other items can be used to demonstrate artistic effects.) Such equipment is used in shows to demonstrate a team's technical ability. Rubber tape, such as electrical tape, is often used to cover the equipment and give it a uniform appearance and protect it from damage during the activity.


Flags
The most fundamental piece of equipment in color guard or winter guard shows is the flag. While winter guard flags take many different sizes and shapes, a standard size is a six-foot pole (metal) with a five-foot "silk", often of a custom design. Smaller flags called "swing flags" are shortened poles with large silks connected to them. These poles are often plastic so they move more fluidly. 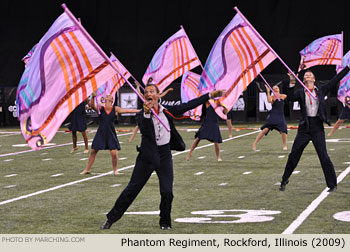 These flags are often incorporated into the artistic element of the performance, even though they are not practical for tossing or spinning, due to the weight and length of the silk. Other flags may range from 5 feet to 7 feet depending upon the intended effect of the piece of equipment. Longer flags are not practical to spin or toss but serve more as holders for large pieces of material.


Rifles
Shaped similar to actual rifle firearms, the rifles used in winter guard are made of solid or hollowed-out lightweight wood and weigh 2–5 pounds (about 1–2.25 kilograms). Most winter guard rifles have a length of 30–39 inches (about 76–99 centimeters) and are composed of six parts: The neck of the rifle. The neck is where the trigger would be on a firearm rifle. Right-handed drop-spins are performed using the neck of the rifle as the axis for the spin, and the neck is also used in common tosses. The bolt is a long silver or black strip of metal or plastic connected to the body of the rifle by screws, made to look like the bolt on a firearm. 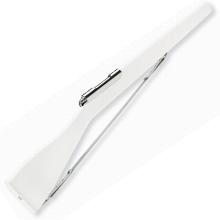 
Sabres
Sabres are elegant pieces of equipment used in winter guard. The length of sabres can range from about 30–39 inches (about 76–99 centimeters). They can either be plastic, metal, or plastic covered metal- though metal is more commonly used. Some metal sabres on the market are intricately decorated with engravings or etchings along the blade. These more intricately designed sabres tend to be more expensive. 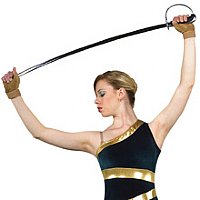 Sabres have two main parts: the blade and the hilt. The blade has a pointed but dull end, and the length of the blade is dull as well. Some winter guard team members wrap their sabres in electrical tape, as they do with rifles. As with rifles, a piece of black or non-white tape placed near the center of rotation is used as a "spotter", making it easier to locate the fast-moving blade while it is rotating in the air. Sabres are used primarily by more advanced guard members.